The St. Lawrence Market, a landmark in Old Downtown Toronto, stands proudly as the home to over 200 food vendors and is frequented by tourists and locals alike. This market founded in 1803, was recently ranked by National Geographic in as the best food market in the world.

A family-friendly neighbourhood with residents from mixed incomes and many different cultural backgrounds. A focal point of this neighbourhood is the St Lawrence Community Centre. The community centre shares it’s space with Market Lane Public School and the St Lawrence Community Day Care. It offer a full range of programming for families, children, adults and seniors. David Crombie Park across the street from the community centre along The Esplanade provides residents with plenty of greenspace and recreation.

The St.Lawrence neighbourhood has been critically acclaimed as a major success story in urban planning. It has become a model for the design and planning of new neighbourhoods across North America. To connect with the St. Lawrence Neighbourhood Association click here. 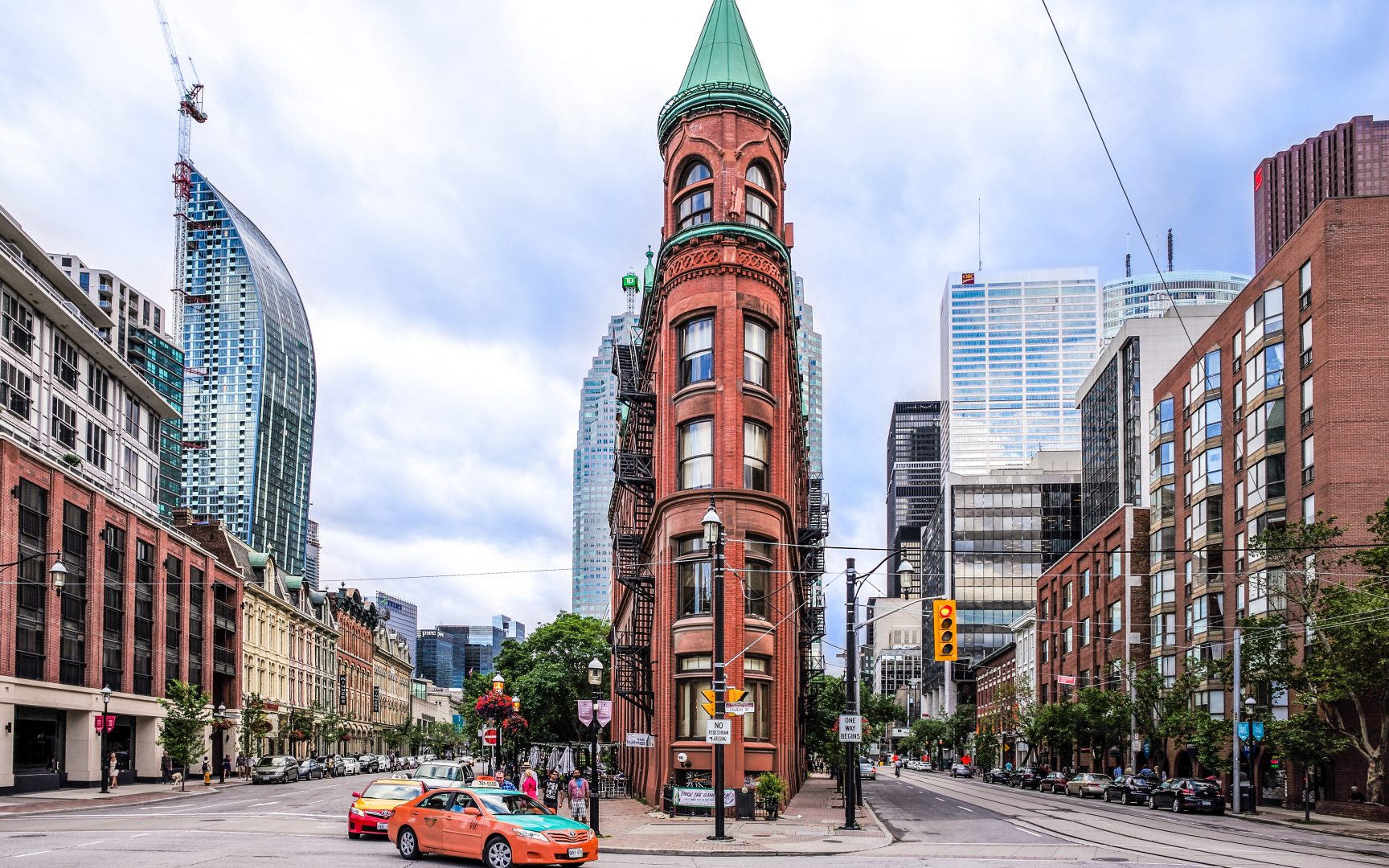 The Gooderham Building, also known as the Flatiron Building, is an historic office building at 49 Wellington Street East. Photo by Shane Carslake for SHANE

This is where Toronto’s first government, industry and commercial centres were located. Numerous important histroical buildings are still standing on the periphery of the neighbourhood including: the South St. Lawrence Market which served as Toronto’s first City Hall, the North St. Lawrence Market which was Toronto’s first official farmers market, the iconic Gooderham Flat Iron building which was the offices for the Gooderham financial empire, the King Edward Hotel designed by E.J. Lennox the architect of Casa Loma, St. James Cathedral which has the tallest spire in Canada, and St. Lawrence Hall which was the cultural and social centre of early Toronto.

Much of the present day St. Lawrence neighbourhood was created from landfill in the early 1800’s. It was originally intended to serve as a public promenade with a grand Esplanade along the waterfront. However the city turned the land over to the railways, which in turn attracted industry to the St. Lawrence area. By the early 1900’s, St. Lawrence had become one of Toronto’s most prominent industrial centres. It remained a vital industrial area until the late 1940’s, when Toronto’s industrial base began moving outside of the city. Consequently, St. Lawrence went into a period of decline which lasted until the 1970’s, when Toronto politicians made the decision to create the present day St. Lawrence neighbourhood.

The apartment buildings and townhouses in the St. Lawrence neighbourhood were designed by some of Toronto’s most accomplished architects. The one consistent feature in these designs is the use of red brick exteriors on all the homes.Private and non-profit housing, market rental buildings, all co-exist here. In the last few years the St. Lawrence neighbourhood has seen the addition of new luxury glass and steel condominium apartment buildings that proliferate throughout the downtown core. 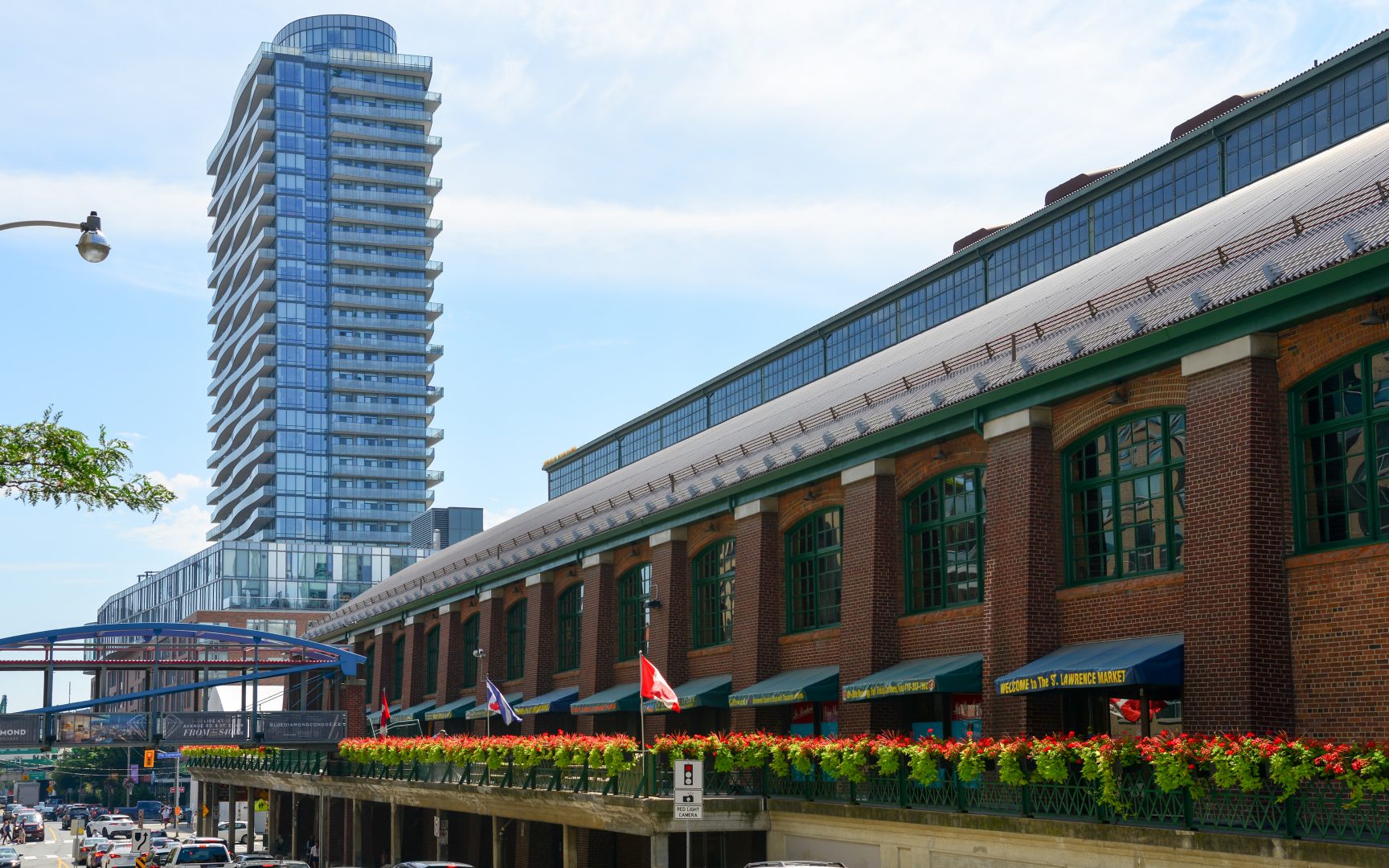 The Esplanade, which runs through the middle of the St. Lawrence neighbourhood, contains retail stores and services that meet the day-to-day needs of the St. Lawrence residents. The Esplanade’s restaurants, bars, and specialty stores also appeal to tourists as well as Torontonians from other neighbourhoods. St. Lawrence residents have the luxury of being able to walk to the famous St. Lawrence Market, a food emporium with over 200 vendors again attracting shoppers from near and far. Stroll through this Toronto landmark and be entertained by live performers, enjoy a vast variety of prepared foods, and purchase everything from fresh seafood to farm fresh eggs and organic chicken. Shopping at this market dubbed the best food market in the world by National Geographic is an experience not to be missed. The South Market is open all week long while the North Building, also known as the “Farmers’ Market”, is open only on Thursdays and Saturdays.

David Crombie Park is a multi-faceted linear park that runs through the centre of the St. Lawrence neighbourhood, along The Esplanade. This park includes pretty strolling and sitting gardens, a waterfall, a handball court, and a basketball court. The St. Lawrence Community Recreation Centre is located on The Esplanade. This modern facility includes squash courts, a swimming pool, a gymnasium, a piano room, a weight room, and a games room.

Backstage On The Esplanade

London On The Esplanade

St Lawrence On The Park

Yorktown On The Park